The first peoples of the Hawaiian islands

The first peoples of the Hawaiian islands are the Kānaka Maoli.

Hawaii is an archipelago of 137 volcanic islands in the Pacific Ocean, about 3200km from the USA mainland. About 40 species of sharks enjoy the warm waters around Hawaii’s islands.

These include the Hammerhead, Tiger, Galapagos and Blacktip Reef Shark.

Hawaii is home to one of the world’s largest protected marine areas – far larger than the inhabited islands themselves.

Created in 2006, the Papahānaumokuākea Marine National Monument is a World Heritage listed USA National Monument. It encompasses 1,510,000km2 of ocean waters, including ten islands and atolls of the Northwestern Hawaiian Islands.

Named after the Hawaiian creator goddess Papahānaumoku and her husband Wākea, the monument embodies the concept of kinship between people and the natural world, and is the place where life begins and where the spirits return to after death.

Unlike most other sharks, the Whitetip Reef Shark, Triaenodon obesus, doesn’t need to keep moving in order to ‘breathe’ through its gills.

Around Hawaii, these sharks hang out in narrow volcanic tunnels.

First Nation Hawaiian peoples see themselves as part of a continuum going back to the ancestral spirits (‘aumākua) who created the universe.

‘Aumākua were invisible, but able to inhabit natural forms, like rocks or animals. They could appear to express concern for the living, warn of danger, and provide comfort or help in times of need.

Some families believe that a spirit can appear as a shark, perhaps to chase fish into nets, or to guide a lost canoe to safety. For them, the killing or eating of any shark is an act of serious disrespect – one for which they might be punished.

Respect for an ‘aumākua was shown by living in a way that was true to the virtues of one’s ancestors. Prayers might be offered to ‘aumākua and sometimes food rituals were held.

When the Wiliwili tree blooms – from late summer to early autumn – Hawaiians know that there is a risk of shark attacks.

This is when female Tiger Sharks migrate to Hawaiian islands to have their pups. 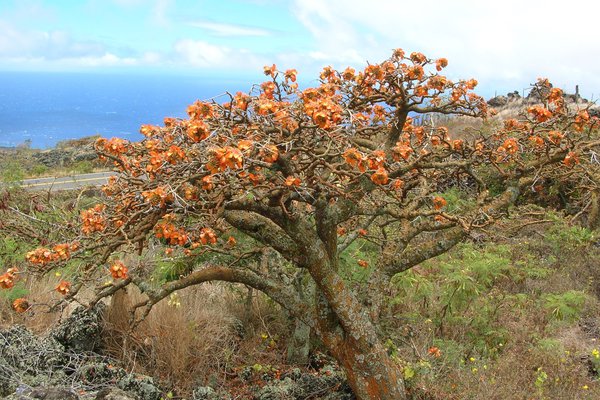 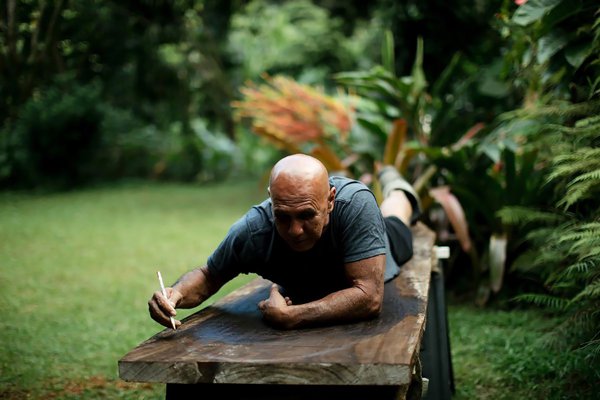 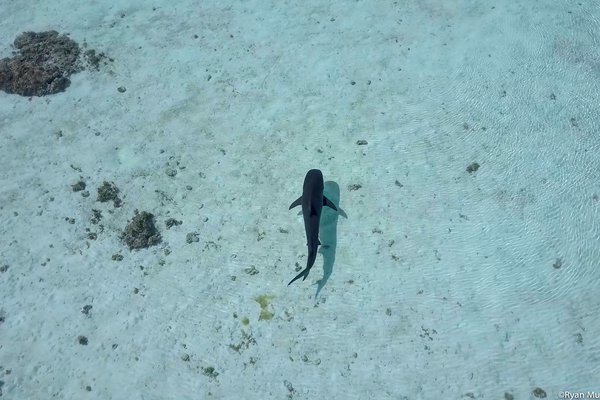 I began surfing at four or five years old. We learn very early about the ocean.

Tom Pohaku Stone was about eight when he first came across a shark while surfing. He’d paddled from Waikiki to Sand Island, several kilometres away.

Coming home, he had to cross a channel at a place called ‘the garbage dump’, where rubbish went straight into the sea.

A huge Tiger Shark was there.

We climbed out and watched it. In late afternoon the sharks always came along to eat. We waited for a while, then got back in the water and had to cross the next channel which was where the tuna packers discarded the tuna remains!

My Dad and uncles told us that we needed to be respectful and be aware of what the sharks were doing. Sharks were always there, but I don’t ever remember anyone being bitten inside Waikiki.

Tom Pohaku Stone. Native person of the Ocean and student of the old ways.